An old couple from Rabbit Marsh pulled their small car up onto the green pastures edging the South Lake near the Reachville shopping area today.

Home to thirty or more ducks, the couple drove up onto their basking area only to sit and eat in their car. eating, talking and watching the sun settle over the rushing waters.

One of the tourists ventured from the car and put her rubbish in the bin. That’s what started the whole horrific ordeal.

“The local ducks, flabbergasted at their apparent invisibility began to circle the couple’s car”, reports Mrs East of Reachville, who went on to say, “I’ve heard about this type of behaviour by tourists, but until you actually see it happen… well, I am at a loss for words and it’s not something I usually suffer with, ask Mrs Ranscoop from number 23, she’ll tell ya”.

“So the ducks started to get a group quack going and had almost entirely circled the car when it started.  They came up on either side of the car, wedged their webbed feet into the soft damp ground, jutted their beaks out and proceeded to scrape them along the outer edge of the car as it tried to reverse out. Those ducks who were coming up the rear, swept up on the exhaust wave and began to gauge at the roof lining” she continued. 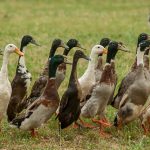 “I could see the tourists were seriously regretting their decision not to share their lunch with the ducks, because I could see the old woman’s arse flapping around all over the passenger’s side front seat searching, for what I can only think was some skerrick of food stuff they may have had left… but it was all too late.”

“The ducks tat had edged up to the front of the car, and were forming a ladder. One duck after another, formed a bridge to the bonnet, and oh… as they reached it, the last duck climbed on top of the rest. He was a big black and white Muscovy we locals call Edwin”.

“I saw it from here”, Mrs East continued. “Edwin waddled up until he reached the windscreen. He looked the old man in the eyes, turned, and shit all over the window. Then he climbed off the car, and all lowered their beaks, waddled back to the Yaksi, and went for a swim. I could hear the couple screaming from here, at the shopping centre as the ducks swam away”.

Well, there you have it. If you go on holiday and don’t feed the ducks, they’ll shit all over you.

Get your half loaf of bread for $1.70 at Mr Durango’s Delicatessen on Leaf Street. Tell him Looney sent you.

This is Craven Looney, hatching a plan for Matt Hershy, should he ever survive his man flu, bringing you the news as it happens, almost on time, every time.

Be the first to comment on "Couple lunch on park land, forgot to feed ducks"

News as it happens